Em and Michael's Blog A blog about us

Keep Calm and Carry On

We like the saying “Keep Calm and Carry On” – – it’s something they used to tell people to help them deal with the fear of being bombed in Britain during World War II.  That is kind of how cancer feels.  Like you are waiting for a bomb to drop.  I like that saying because it is a reminder that we can’t let fear paralyze our lives.   We need to go on.  That is why I haven’t posted in a while.  We are enjoying life and carrying on!

Ever since Mike’s diagnosis we have met so many truly amazing people who LIVE with melanoma.  Our “mole mates” are inspirational.  I was bursting with pride when our friend Christina McEvoy was featured in the NY Times.  Christina has Stage 4 melanoma (in remission).  Between treatments of Yervoy and caring for her young children, she started a group in Idaho for melanoma survivors (Sol Survivors).   An amazing woman!  Our other friend Sue Lescure had her eye removed due to her ocular melanoma.  What torture she has endured – all with such grace and beauty! She is also amazing…and in remission!  And I can’t forget my friend Shari.   When they found melanoma in her brain and lungs she stayed very positive.  This is a woman who, a day after brain surgery, came to see me in Palo Alto and brought ME a gift – a little porcelain bird that says “Be Brave” painted on it.  I am happy to report that Shari is also in remission.

Sadly, I can’t forget the people whose lives ended due to melanoma over the past months.  We lost a few good men.  One was Mike Brockey.   I admired the very honest journey he took with melanoma.  Another was Andy Wileman.  http://thewilemansjourney.blogspot.com/ Andy was a 40 year old police officer and father of young children who bravely fought Stage IV melanoma.  He passed away in December. My heart goes out to Mike and Andy’s family.  These two men left a mark on me that I won’t forget.

Mike’s sister and I are on the event committee for the Melanoma Research Foundation San Francisco Gala.  If you can join us on May 17 – or donate auction items – we would be thrilled. I can’t wait to see all the wonderful people at this event – from the top local docs to the local celebs.  But the main reason we love this event is because we get to connect with melanoma survivors.   It is therapeutic and it helps us keep calm and carry on.

All clear for 2 years 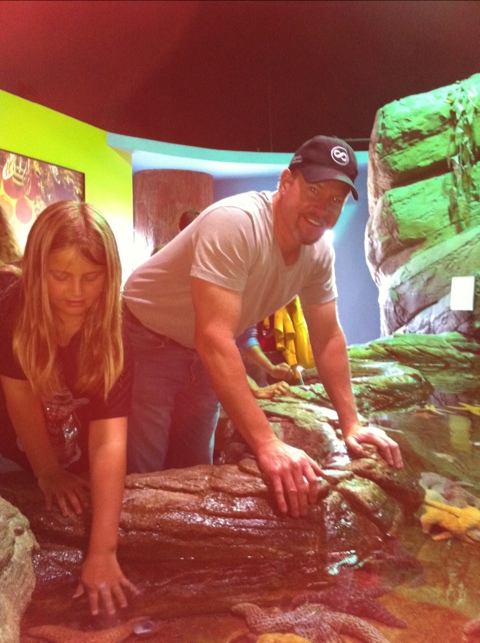 We got the news last week that Mike is still clear of melanoma (no evidence of disease) from his latest pet scan. We are thrilled to say the least. We spent the entire weekend waiting for results and went to Pier 39, Rainforest Cafe, and the aquarium to keep ourselves occupied. I have to say that Scan time sucks and it has a way of making you feel so lonely. Now that Mike is two years out, his scans will only happen once a year as opposed to every 6 months…a good thing!

As we rejoice, we will not forget our fellow melanoma warriors who are fighting this horrible disease.

May was a crazy month for our household.  Many of our family members decided to be born in May, including our two children who are separated by 2 years and one week and my brother and sister in law, in addition to many others that are near and dear to us.

One thing we enjoy doing each year is throwing a big double birthday party for the kids.  So we invited 60 of their classmates and had a “treasure hunt” at the lovely Junipero Serra County Park in San Bruno. Other than the violent wind and the end of the world prediction on the same day, it was a great day of fun.

In addition to being Melanoma month,  May 4 was the Melanoma Research Foundation’s Wings of Hope gala in San Francisco.  I joined the event committee and helped them with a bit of marketing and PR in addition to the fun task of collecting bottles of gin, scotch and rum from my generous friends for the party.  The best part: Mike and I had the distinct pleasure of meeting a number of long term Stage IV melanoma survivors…. Erick Davis, Suzanne Lescure, and Kari Worth – all patients of Dr David Minor at Cal Pacific Medical Center. Suzanne and Kari were both recognized for their contributions at the event and it was so uplifting to meet them.   Here are some pics of the gala:

Mike and Emily and MRF event in San Francisco

May was fun, but I am looking forward to an event-less June!

Earlier this year, we got an email from the David Cornfield Melanoma Fund asking if we knew young people with melanoma for a video they were making (Mike was considered too old at 43.. haha!).  David Cornfield was just 32 when he died of melanoma – his wife is featured in the video and has carried on his legacy.  Yesterday the producers contacted us with their completed video “Dear 16-year-old me”..but I had already seen it because it has become so popular on YouTube so quickly.  I am sharing it with everyone I know because it is so moving and they absolutely nail it….what I have been trying to communicate to people – that young people are not immune to cancer – especially melanoma – and that if you catch it early you could save your life.  I hope you will watch it and share it with your friends and family.

Thankful for the Roller Coaster

Last week Mike got the news that his scans were once again clear, 18 mos after diagnosis. And once again it was PURE TORTURE waiting for the call from the doc – and PURE RELIEF when we got the news.  Our life would have changed so drastically if we had gotten bad news.  But instead we celebrated in Vegas this past weekend with 3 other couples. We had a blast!

Someone asked me if the clear scans meant Mike had beaten melanoma.   I would love to say yes…but we really don’t know the answer to that because melanoma is different than most cancers.  Many people with other cancers can say they are “cured” 5 years out.  But Melanoma often comes back unexpectedly –  5-20 years later.   I don’t think we will ever live without the fear that it will return – unless they find a drug for this horrible disease.

So for now, we will just continue to live our lives as normal as possible and enjoy every moment.  Life is a roller coaster ride – some parts are scary and some parts are fun…

6 Month Increments of Normalcy (kind of)

So another 6 months have passed and that means it’s PET scan time for Mike.  We are 18 mos out from a Stage IIIa melanoma diagnosis.  It seems our life is now broken into 6 month increments.  Waiting for the scan results is scary.  We know of multiple people who have gotten bad news from scans even though they felt completely normal.  That is how melanoma rolls.  But the the good news is that when Mike hits 2 years, he will only have PET scans once a year.

I have to say that we have enjoyed the past 6 months of normal life.  Life certainly isn’t the same as it was before a cancer diagnosis, but now we realize that it will never be.  And that is just fine with us.  So as we wait for scan results over the weekend, we will appreciate the past 6 months of health and normalcy.  The fact that we can pay our bills, go to work, school,  dinner, etc. is something we try to appreciate (well, most of the time).  There are so many others suffering from illness and they just can’t do the mundane tasks we all take for granted.  So please take a moment to appreciate your life, your health, your everyday mundane stuff because you are truly blessed to have these things.

My favorite part of the night was honoring Darren Farwell , my high school friend who lost his battle at age 32 to melanoma. Darren’s friend Devin helped me we give away some protective sunware items from UVSkinz.com  – a company that Darren’s wife started after he died.

My other favorite part was when my 9 year old daughter stood in front of 50 people and told them to “check their buttocks” for melanoma.  It was hysterical, but so true!  And we ended up winning one of the raffle prizes – one week at a Florida condo – it wasnt rigged, I swear!

All in all, it was so nice to see everyone and I hope more people will come to my next one – especially others with melanoma who live around the area. Margaritas for Melanoma is just the beginnning for us.  Our next event will be in the Spring so stay tuned!

Em and Michael's Blog
Create a free website or blog at WordPress.com.